Year:
1963
Adress:
Marchstrasse 10
Website:
Website
About mankind
Shape
From every angle the artwork is entirely different; the image is literally more dimensional. From the street-side lines are starting from a central point forming a wide area through a bend. This makes me think of a person with wings. A nice detail is the which on the bottom line makes a nod as if this is a knee. From the square-side lines remain closer together and create an open structure. From this angle the image of flames appear to me.
Material
A variety of techniques is applied to finish the structure: a flat, sloping or rough surface, holes or ridges, deep notches or protruding lines and large openings. These finishings and also the lines walk in a natural way into each other and serve the whole.
Location
The artwork is near a large roundabout so the depth and versatility of the shapes are clearly visible. The structure is standing in an area with universities and with many young people. In such an environment I taste purpose and optimism. And that is what conveys the artwork.
Meaning
Mankind is versatile, powerful and energetic, that's what Die Flamme says. This is a wonderful positive artwork.
By Theo, www.artatsite.com

Compared with other artworks
Why always in bronze, would Tony Burke say with his Helix Stacked Glass Structure (London, picture 1, more information). The fire that edited the glass still appears to me, and creates a powerful twisting motion.

While clear lines croak the surface, they become long lines that give dynamism to the artwork Onda Victoria by Franceso Somaini (Milan, picture 2, more information). The artwork has a great power of expression in the transfer of a large number of meanings.

The artwork Monumento Caduti by Carlo Ramous (Milan, picture 3, more information) has lines and spaces that lie along each other and may slowly move in the wind without a clear focus.

Power, energy, and elegancy has Monumento Arma made by Luciano Minguzi (Milan, picture 4, more information). To me some elementes are a little too explicit, like the bowl on the bottom of the work.
By Theo, www.artatsite.com 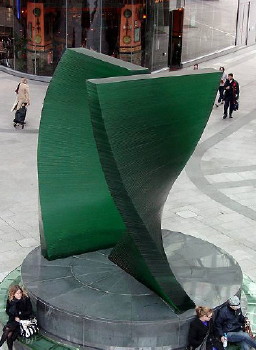 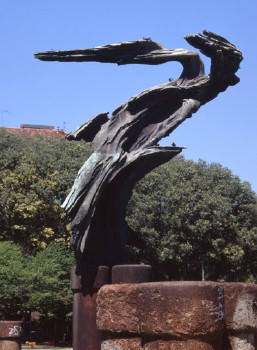 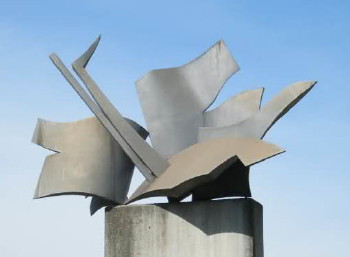 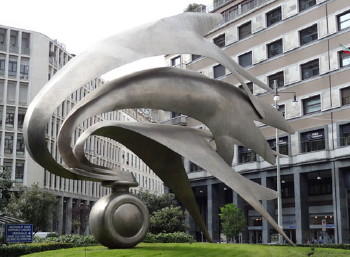 www.wikipedia.org:
Bernhard Heiliger (11 November 1915, Stettin - 25 October 1995, Berlin) was a German artist. He was considered "West Germany's foremost sculptor", and his large public artworks are a prominent presence in many German cities, especially Berlin.
Heiliger's diverse output stretches from his early, organically abstracted figures to his late nonobjective, geometric abstractions. His early work (1945–1962), focuses on the human figure, which is treated in an organic style influenced by Aristide Maillol and Henry Moore. Also from this period is a series of portrait busts of prominent contemporary Germans. The artist departed from the human figure in his second period (1962–1970), instead developing imagery of the"flight of birds and vegetable forms" influenced by the nonrepresentational Informelstyle. The seven-meter-high The Flame (Flamme, 1962–63), commissioned by the city of Berlin for Ernst-Reuter-Platz, is considered the key work in the transition between the early and middle periods. The Five Continents (Die fünf Erdteile, 1961), by contrast, still alludes to the human figure in the torso-like shapes that make up the composition.
Kosmos 70, commissioned in 1970 by the city of Berlin for the restored Reichstag building, marks the transition into Heiliger's final period, where spheres and angular forms linked by lines of wire allude to planets and solar systems. The different stylistic phases in Heiliger's career are connected to changes in material: whereas his works from the 50's and 60's are cast materials, such as cast stone or bronze, the works from the 70's onward are most often made of stainless steel or corten steel."