Year:
1993
Adress:
Neue Wache
Website:
Website
Expresses pain and love
Shape
A touching small statue sits in a large square-tight space that is part of a kind of temple. A round woman is wrapped in a robe and holding a thin man. The man is holding his head turned up and resting against the breast of the woman. The man has closed eyes. Woman holds the hand of skinny man loosely in hers. The woman holds her right hand to her mouth, her eyebrows frown and she seems to cry.
Material
The silk-shiny material has some depth because of the variations of dark gray colors.
Location
The space has a sacred atmosphere although tourists coming in and out continuously. Most people arrive cautiously, waiting to get used to the darkness and when they see the picture they walk cautiously closer. Cheerful children fall silent almost immediately.
Impact
The artwork has a big impact even if it is small. It is immediately clear that the man suffers seriously. It is also clear that the woman gives everything that she has. This statue comforts. The artwork expresses pain and love and uses all means to transfer these feelings. The picture is so clear that it touches almost everyone.
Meaning
A pieta with such strong imagery in the heart of Berlin is an important sign that testifies to humanity, sincerity to history, wisdom and vitality. This artwork and this space is important for German history.

Compared with other artworks
The woman in the Pieta by Jurgen Pansow (Berlin, picture 1, more information) is in shock and she holds a lifeless man in her arms. It’s not possible to make contact with the woman and the situation for the man is hopeless. This artwork can not give any comfort.

The Pieta by Fritz Koenig (Berlin, picture 2, more information) can not be read easily. Proper examination reveals that the carrying person is watching attentive to the suffering person. The large flat areas, the schematic lines and the reserved attitude gives me some aloofness.

In the work of Una Maternità Pieta by Vighen Avetis (Florence, picture 3, more information) does not move because of the woman and the kids who doesn’t make enough contact because of the attention elsewhere or there play.
By Theo, www.artatsite.com 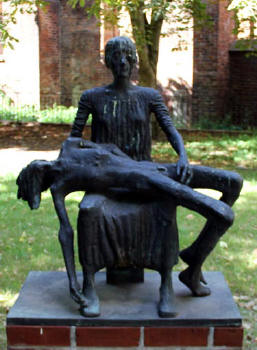 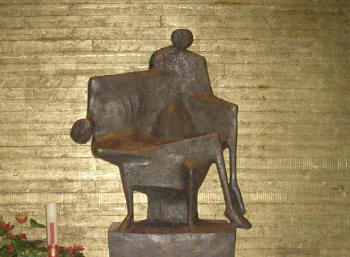 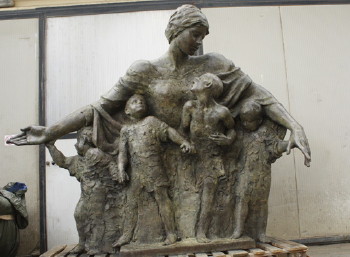 Picture 3
www.kollwitz.de:
On the anniversary of her son Peter's death in 1914 the artist noted in her diary in 1937: "I am working on a small sculpture which has developed out of my attempt to make a sculpture of an old person. It has become something like a Pietà. The mother is seated and has her dead son lying between her knees in her lap. There is no longer pain - only reflection". Reflection on the fact "that her son was not accepted by people. She is an old, lonely and gloomily reflective woman." (Translated from: Tagebücher).
Käthe Kollwitz' Pietà which inspite of her remarks she did not regard as religious differs clearly from "traditional" Pietà-representations where the dead Jesus is presented to the observer. In Käthe Kollwitz' Pietà the son is not resting on his mother's knees, he is huddled on the ground between her legs. As his legs are drawn up so far that he is totally enclosed by his mother's body he seems like a child seeking protection in his mother's lap.
Since the artist had not included her fallen son in his memorial sculpture in 1932 and had only shown the mourning parents, she created an intimate and private memorial for him and herself in this sculpture. When in 1993 the Federal Republic in Berlin, the new capital, erected a central memorial for the victims of war and dictatorship in Schinkel's "Royal Guard House" (Neue Wache) with an enlarged sculpture of Käthe Kollwitz' Pietà (made by Harald Haacke), this gave rise to an heated controversy.
The former German Chancellor, Helmut Kohl, who had been the moving force behind this initiative, was reproached on all sides for choosing this sculpture. A woman mourning her son did not do justice to the victims of the Holocaust and the mass deaths of the Second World War but only those of the First World War with the roughly 2 million German soldiers who fell and to whom Käthe Kollwitz' Pietà refers.
The Käthe Kollwitz Museum Köln has two copies of the Pietà, one of the very first casts which was made during the Second World War and an early bronze cast from the period after 1945.