Year:
1999
Adress:
Westferry Circus
Website:
Website
Aspects of this artwork
Shape
The artwork has a round shape, a rounded disk like a wheel. A round shape is a basic shape, which by itself already provides sufficient explanation.
Material
The artwork is carved out of stone. In the center, the material is perfectly smoothly polished. It makes me think of a belly button of a woman. The material is shiny and I can almost feel the skin.
From this point radial lines make a rough surface. It seems an old, medieval object with an essential and universal function.
The work is complete made of stone. This honest material makes me confidential because the inside is what you see on the outside. And this gives me a peaceful feeling.
Location
It is located in a park on the edge of an upscale office park. To me the sculpture is standing in another world. It is standing alone and it’s giving eternal value. The park has a view on the Thames. Would the artwork be fished out of the river?
Impact
The artwork is giving beauty and meaning in a utilitarian space.
Meaning
This is a beautiful piece of art that is honest, is showing itself, gives a sense of beauty and meaning without imposing itself.
By Theo, www.artatsite.com

Compared with other artworks
The artwork Aurora by Ruth Asawa (San Francisco, picture 1, more information) is made by a human hand, perhaps in first instance Japanese paper folded together. It can make sense to Japanese people, many of whom live in San Francisco. The work is standing in the water. On the background there is Oakland Bay Bridge (looking alike the nearby legendary Golden Gate Bridge). This work is made by hand and standing in the nature, all though the scale is different.

The artwork Tau by Roger Berry (San Francisco, picture 2, more information) is wonderfully attractive. In an artificial space made of concrete and steel, this is a welcome game changer by use of the basic shape, the beautiful material, the correct scale and the craftsmanship.

The artwork Oriental Light Sundail (artist unknown, Shanghai, picture 3, more information) is also made by hands. The choosen material makes it reminiscent of an object for space travel, it is in any case a modern object. It seems rather to have an instrumental than an artistic function.

A Dew Drop by Fai Chin Lee (Hong Kong, picture 4, more information) is more like a mirror than a drop of water (what is suggested by the title). It reflects everything from the environment but nothing ot the interior is visible. It is located in an airport. On this location people don’t tend to show much of their interior.
By Theo, www.artatsite.com 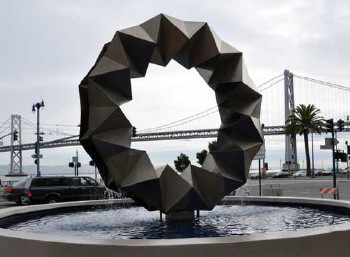 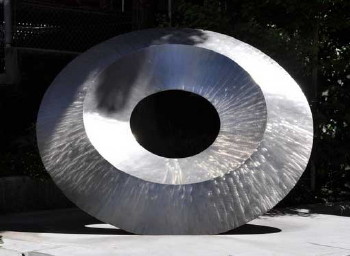 Picture 4
www.canarywharfcommunityoutreach.com:
Vanishing Point looks a little like a mythical sea creature's shell that has perhaps been washed up from the Thames. The stone has been polished to reveal the natural, lined core.
Having trained as a stone mason in Canada, Battle came to England to study stone carving and in 1997 became Head Carver at Salisbury Cathedral, contributing to its constant restoration works at the same time as running his own studio. The time spent working on medieval forms nurtured his desire to create more contemporary, self expressive work.

www.wharf.co.uk:
Compared to a sea creature’s empty shell, this giant fossil-like sculpture stands at the edge of Westferry circus.
Carved from Derbyshire stone and resting on a steel plinth, Vanishing Point arrived in Canary Wharf as part of the The Shape Of The Century exhibition in 1999.
This huge event celebrated 100 years of sculpture in Britain and re-established Docklands as part of London’s artistic landscape.
Sculptor Jay Battle said: “My own sculpture is a way of expressing myself in a complete and fulfilling way.
“I think vanishing point envisages a point at which randomness and individuality become uniform.
Countless hands have smoothed the stone surface, adding to the piece’s intimate nature.
Canadian-born Battle began as an apprentice in architectural stone carving.
At the time he created Vanishing Point he was head carver at Salisbury Cathedral.