Year:
2005
Adress:
Vermont at Wilshire
Website:
Website
Harmony and cohesion
At a crossroads, next to an entrance to the subway and a shopping area, this work Mural by April Greiman is does not imposes itself. The work is both in day- and night-time (with the help of a perfect lighting) atmospheric and brings me a spiritual longing for harmony and cohesion. After examination it appears to depict a finger and bowl by the use of a rich palette of colors.

At first nothing is noticed but suddenly it becomes apparent: the artwork Four Seasons by Rob Birza (Amsterdam, picture 4, more information) changes continuously. Because of the changing of the colors, the artwork express different emotions. The artwork is formed by four faces. Because of the simultaneously changing of color, this makes a different combination of spheres. This stimulates the emotional life in this seeming endless and impersonal walkway in the airport.
By Theo, www.artatsite.com 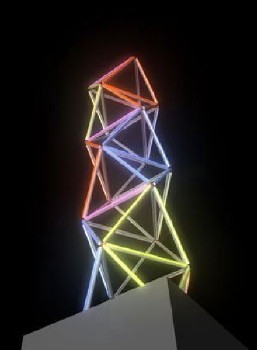 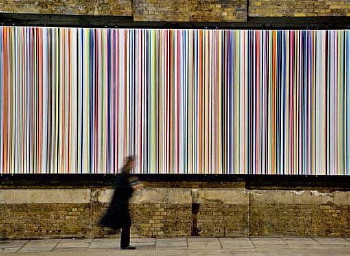 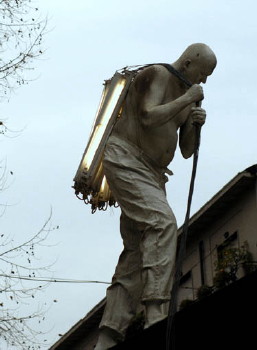 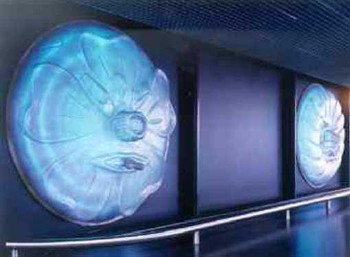 Picture 4
www.designindaba.com:
April Greiman: "If you have a good idea there aren't any boundaries."
This work is an example of how Greiman expresses design through different and flexible mediums. “The challenge is really on the one hand being fluent in those languages of technologies and on the other hand, not burrowing into one tool, or one technology such that you have a mid-life crisis at the age of 30, you know, or 25,” says Greiman.
She encourages designers to ask themselves, “How can you best get the best message? ... How can you create an information hierarchy? What are your ways of messaging?”
Greiman refers to the ability to use both technological and classical tools as “staying fluent.” In this way, design becomes a language and in order to communicate with this language, it is necessary to be fluent in all its forms.

www.people.sunyit.edu:
Postmodernism is a term that is open to inter-pretation. Some feel that postmodernism is a tweak on modernist ideals. Others feel that postmodernism is a rebellion or reaction to previous political ideas that were deemed to be corrupt. Post modernism related to graphic design is more open to view points. There is not one specific standard that applies to all postmodern art. The notion about this movement is that it is what you make it. As a graphic designer, April reacted to the changes around her, used the ideas from modernism while embracing new outlooks and new changes. Tak-ing advantage of both old and new tools, April created postmodern and transmedia works.Post Modernism occurred after the “New Wave”. It was popular in the late 1980’s, 1990’s and it even extends to current art practices.

www.designindaba.com:
When Design Indaba spoke to Greiman during the AGI Open in Paris, she explained that her more classical education has actually allowed her to tackle ideas without creative boundaries. This is due to her ability to communicate one message through multiple forms of media.
Greiman, who also teaches at the School of Architecture in Woodbury University and at the Southern California Institute of Architecture, explores the use of graphic design in the built environment.
In 1984, while Greiman was head of the design department at the California Institute of the Arts, she successfully lobbied to change the department name from “Graphic Design” to “Visual Communication.”
She did this in the hope that by changing the name, students would not feel restricted by the traditional tools associated with graphic design and would rather approach the subject through any visual method of communication.

www.aprilgreiman.com:
April Greiman is a ​thinker, designer, and artist whose transmedia projects, which address all areas and scales of design from communications to textiles and from architecture to new media, together with the use of advanced digital technology, have made her studio unique contributors to the design world.