Year:
1991
Adress:
Figueroa. Wilshire Str
Website:
Website
controlling nature
Eric Orr shows with the artwork Prime Matter that humans control nature; lights the fire when and where humans wants. There is a pillar of natural stone and there is natural fire. This is a powerful and great artwork. The only thing; to me, fire is a too fierce primary power to be part of subtle art.
By Theo, www.artatsite.com

Compared with other artworks
Everyone knows intuitively that an Egyptian obelisk (Paris, picture 1, more information) is about human strength, intelligence, connecting earth and heaven. It is not necessary to delve into the vanity and the ubiquitous role of religion during the creation of the artwork.

This needle (Paris, Bergeret Pierre, picture 2, more information) concerns obviously the role of the ruler, his victories and longing for immortality that the artwork becomes complacent and loses sight of the social context. The artistic qualities of the artwork have a serving character or are underexposed.

This artwork Angel by Emily Young (London, picture 3, more information) has the potential to say meaningful things about the role of the European tradition because it combines elements from this tradition creatively. On top of a number of pillars a face is superimposed. The eyes, nose and mouth are surrounded by coarse hair. The face radiates self-confidence, strength and sympathy. To me, a column is an important supporting element of a building with a social or religious function. By putting a face on a pedestal, I am thinking of the people who shaped this social or religious function.

Iosa Ghini Massimo has made with Quattro Punti Per Una Torre (Milan, picture 4, more information) a significant, eye-catching artwork. The monumental form opens itself careful and shows the tingle interior. The sculpture stands in a courtyard of a university. Should the university recognize the desire to be strong and still be open, vulnerable and also demonstrate vitality?

Nike 89 made by Wieland Foester (Berlin, picture 5, more information) is not a perfect angel, but rather a touchingly sweet person. You see wings, the sculpture is silvered, so it must be a special person. At the same time the rough finish and strange shapes make it clear that it’s human to make mistakes.
By Theo, www.artatsite.com 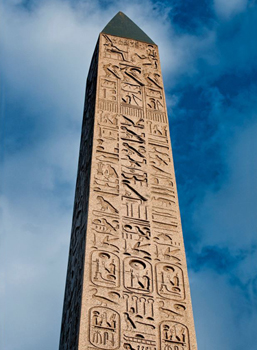 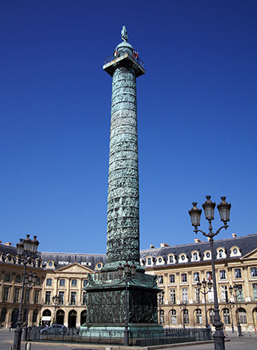 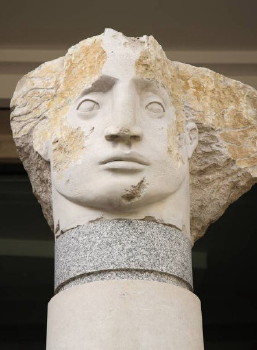 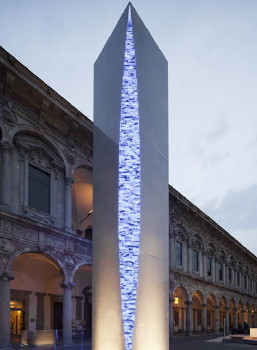 Picture 5
www.publicartinla.com
'L.A. Prime Matter' consists of two 32' high triangular bronze towers at the northwest corner of Wilshire and Figueroa. Specially designed ridges in the sides of the towers form patterns in the water that slowly flows down from the top. The mechanical components of the fountain were supplied by Water Entertainment Technologies (WET), Inc., the same company that constructed fountains at the Music Center and California Plaza on Bunker Hill. In contrast to other works in the"Prime Matter" series, in which the flame begins at the bottom and moves up, the fire in"L.A. Prime Matter" spilled down from the top. Though this work was conceived as juxtaposing light, fire and water, only water remains because two components no longer function. A xenon light, placed at the center of the plinth to shine 1000 feet upward like a searchlight, never operated properly because scratches on the lens blocked the light. In addition, the system regulating the cascading flame has been turned off for an upgrade. A new fire system and lens were both scheduled to be installed in early 1999.

www.wikipedia.org:
In both his installations, sculpture and paintings, Eric Orr worked with elemental qualities of natural materials, e.g. stone, metal, water, and fire, gold leaf, lead, blood, human skull, and AM/FM radio parts. Orr worked with the"phenomenological exploration of perception." His body of work also includes monochromatic paintings, and large scale fountains (with water & fire). His work was influenced by a religio-philosophical conceptualization of space icons found in ancient religions and cultures, such as Egyptian symbolism and Buddhist Spiritualism. Orr is associated with Light and Space, a group of mostly West Coast artists whose work is primarily concerned with perceptual experience stemming from the viewer's interaction with their work."The space itself changes you, instead of an object." This group also includes, among others, artists James Turrell, Dewain Valentine, Peter Alexander, Robert Irwin, and Ron Cooper."Orr always pursued a phenomenological exploration of perception, pushing retinal responses to the limit through ingenious installations or through paintings that blur space via complex relationships of color and gesture...mystical shaman, the alchemical philosopher, whose preoccupations with ritual and the properties of space-time and negative space have led to a body of work that is superficially benign and elegant, sucking the viewer in with Zen-like calm and innocence, yet simultaneously dark and fetishistic."

www.wikipedia.org:
Eric Orr (1939–1998) was a painter and installation artist. He lived and worked in Venice, California from 1965–1998, and is a key figure of the Light and Space movement. Before moving to Los Angeles in 1965, Orr was a civil rights worker in Mississippi. His artworks are found in the collections of many major cultural institutions, and his work is installed in public and private spaces internationally.