Year:
1983
Adress:
Piazza Einaudi
Website:
Website
Seems like a lonely human
This person (Human Condition, Agenore Fabbri) is incorporated into larger and smaller structures. It’s a pity for this man that the structures don’t seems to move and therefore this man seems quite lonely.
By Theo, www.artatsite.com

The artwork Quantum Cload by Anthony Gormley (London, temporary, picture 2, more information) once stood on a structure inside the Thames, with on the background the elements air and water. This artwork is a good starting point for a creative and meaningful artwork that makes use of the elements which are surrounding the artwork. 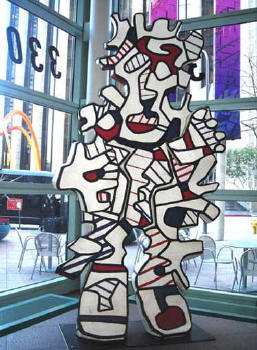 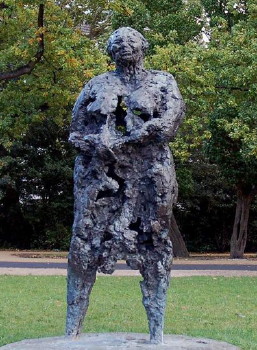 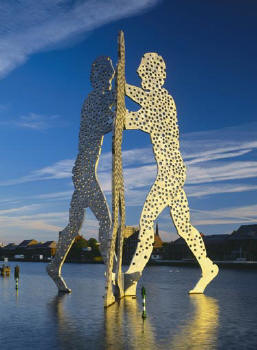 Picture 5
www.revolvy.com:
Agenore Fabbri (20 May 1911 - 7 November 1998) was an Italian sculptor and painter. He moved between a rigorous expressionism and experimental informalism. Fabbri was born in Quarrata (Tuscany). At the age of 12, he attended the Scuola d'Arte in Pistoia and then, under the instruction of the painter Fabio Casanova, he decided to embark on an artistic career and created his first sculptures, mainly using the wax and plaster.
In 1932 Fabbri, in order to continue his education at the Accademia di Belle Arti, moved to Florence where he frequented the artists' Caffè Giubbe Rosse, meeting point for the intellectuals known as the Ermetici Group (Eugenio Montale, Carlo Bo, etc.) and also came into contact with the painter Ottone Rosai and the poet Mario Luzi. At the end of the year he moved to Albisola (Savona), where he worked in the La Fiamma (The Flame) ceramic workshop and created his first terracotta sculptures, mainly biblical figures.
In 1933 he made friends with Tullio Mazzotti (better known by the name of Tullio d'Albisola), who owns the Giuseppe Mazzotti (Tullio's father) ceramic factory in Albissola Marina. It is here that the most significant artists of the second generation of Futurism worked under the patronage of Filippo Tommaso Marinetti: Fillia, Antonio Sant'Elia, Nicolaj Diulgheroff, etc.
Later he established a small studio and came into contact with Arturo Martini and Lucio Fontana with whom he began a friendship until Fontana's death (1968).