Year:
2010
Adress:
Time Square
Website:
Website
Feeling relaxation and togetherness
The artwork gives space because the air seems to be reflected. But because of the lines of the water there is movement, cheerfulness and positivity.
I can imagine that Dolly Dilwort doesn’t use a green color; this makes me think of trees and plants which are static and gives a call for a more active attitude.
Cool Water, Hot Island brings tranquillity, naturalness, positivity in the city.
Molly Dilwort gives with her Cool Water, Hot Island refreshment and atmosphere in the city and invites you to move on the waves arranged on Time Square.
By Theo, www.artatsite.com

Compared with other works
Molly Dilwort gives her Cool Water Hot Island refreshment and atmosphere in the city and invites you to move on the waves arranged on Time Square.

Do you recognize this: walking endlessly in the evening in a sad city without much to see, especially when you cross a square? Som has created with Avenue Lit Floor (London, picture 1, more information) a playful art made of illuminated lines that cater on a sophisticated way to the people crossing the square. The artwork uses technology to control lights. This is modern, interesting. The colors are playful and make merry. The artwork is physical: I feel like Michael Jackson and have a tendency to dance, to be the center, to carry out a perfect act. This is a good work of art that invites you to move, make fun together and seduce.

Untitled by Diana Thater (Los Angeles, picture 3, more information) uses warm fresh materials so that the atmosphere is improved in the city's night. 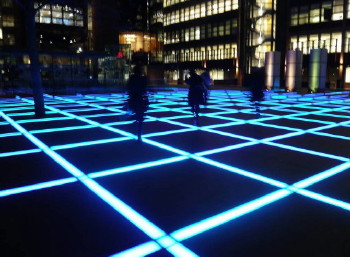 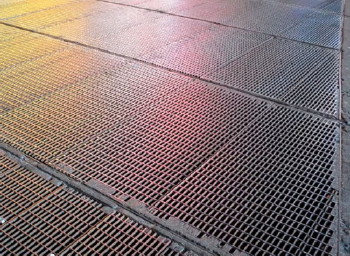 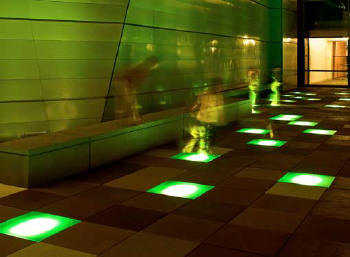 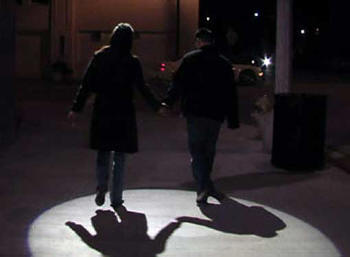 Picture 4
www.thelmagazine.com:
A pavement painting proposal by Brooklyn-based artist Molly Dilworth, who paints large murals and rooftop forms that can barely be taken in by the human eye but are perfect for satellites, has been selected for the stretch of Broadway's pedestrian plaza in Times Square. Her design, "Cool Water, Hot Island" (pictured), resembles a giant, psychedelic, pixelated wave crashing on the congested tourist plaza, Day After Tomorrow-style, and should stretch along Broadway from 42nd Street to 47th Street when it's completed by mid-July.
Dilworth's design, based on NASA heat maps of Manhattan, was selected from a field of 150 proposals, and in addition to seeing her vision brought to the Midtown millions (no word on what kind of disruptions the painting process will cause), and she received a $15,000 prize for the win.

www.artcritical.com:
Brooklyn-based artist Molly Dilworth was chosen as the winner of the reNEWable Times Square Design Competition to cover seven block of paved ground along Broadway from 47th to 42nd Streets.
Her submission, Cool Water, Hot Island, will be installed in June and remain for 18 months. The winning design’s color palette of cool swirling blues suggests a river or topographical maps. It relates to the geography of the area and the Great Kill stream that once flowed there. The colors reflect less light, making it cooler and more comfortable for pedestrians, and contrast with the reds and yellows of the neon billboards.
Cool Water, Hot Island was selected from 150 applications and Dilworth will receive $15,000 for her idea. Representatives from the DOT, Times Square Alliance, the Mayor’s Office, the Design Commission and an outside artist advisor chose the winning proposal.
This project is part of a larger renovation of Times Square, which began in May 2009 when Bloomberg rerouted traffic away from the Square to make it a car-free pedestrian zone designed to increase safety in Midtown. The number of pedestrian and motorist injuries is already down significantly (35% and 63% respectively) compared to this time last year. Although drivers claimed that rerouting traffic would cause problems, DOT studies have shown that travel time has generally increased.
Dilworth recent work includes large rooftop paintings that can be viewed from space via Google Earth or similar satellite image providers. One such painting is installed on the roof of the Hendershot Gallery at 547 West 27th Street in Chelsea. Dilworth earned her MFA from NYU in 2003.