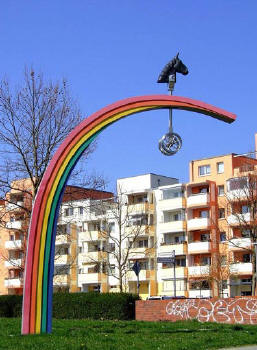 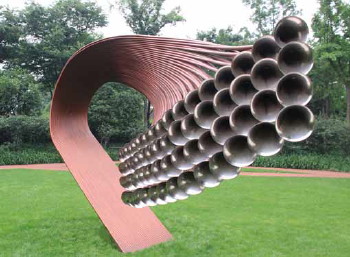 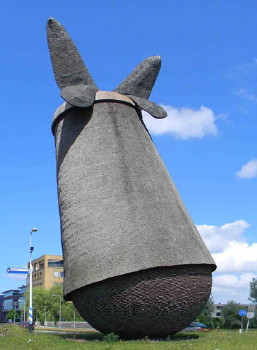 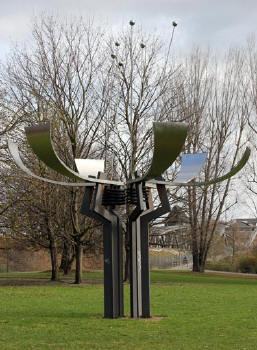 Picture 1
Picture 2
www.mfa.gov.il:
A November 2012 exhibition at Artists House Tel Aviv, “Birds in Chinese,” included models, photos, videos and small-scale replicas she has sculpted for Chinese venues, including her 29.5-foot-high Bird of Paradise, now in Shanghai; the award-winning 24.5-foot-high Totem comprised of three fanciful birds; and “Group of Birds.” Israel’s environmental sculptress Dina Merhav transforms scrap industrial metal into winged creatures and other soaring works of art. Like the timeless bird and angels she fashions from huge pieces of scrap iron, sculptress Dina Merhav is going strong at age 76. “I want to spread out my sculptures all over the world,” says Merhav. “My ambition hasn’t dimmed with age. I feel I can do more, and better.” Working out of a studio in Kibbutz Nir Etzion, near her home in the Ein Hod artists’ village near Haifa, the Yugoslavian-born Merhav is one Israel’s foremost environmental sculptors. It all started when she was 48 years old, prompted by a November 1989 phone call from Yehuda Izraeli at Nesher Israel Cement Enterprises in Haifa. At that point, Merhav had been sculpting in stone for about five years following a shift from her 28-year career in graphic design. Someone had noticed her work and recommended her to Izraeli. He asked if she would accept a commission to make a sculpture in the industrial park. “I visited and saw the enormous mass of scrap iron in the junkyard, and I fell in love with it. I was so fascinated with the enormous, fantastic shapes and also with the soil that was inside it,” Merhav says. That single commission turned into a decade-long project resulting in the Merhav Nesher Industrial Sculpture Park on the factory’s premises. Today, Merhav installations can be seen worldwide: in the Guilin YUZI Paradise international sculpture park in southern China, in the Olympic Park in Beijing, in India, Macedonia, Romania, Switzerland, Canada and the United States.

www.ein-hod.info:
It happened in 2003 when I was invited to participate in the 9th international sculpture symposium at Yuzi Paradise near Guilin. I managed to construct two huge sculptures during the symposium, with the efficient help of Chinese assistants. The Bird of Paradise, 2003, painted iron, 880x550x560 cm. installed in the Yuenyuanyuan sculpture Park in Shanghai and Fishing, 2003, iron, 1050x 500x350 cm. placed in the main entrance of the Yuzi Paradise International Sculpture Park. The Yuzi Paradise Sculpture Park was established by Mr. Tsao who had the vision and the financial means to execute his ambitious dream. Besides preserving nature, the main aim of the project was to connect the unique landscape with visual art, in order to create a total experience. This experience includes exhibiting art, especially modern sculpture, art education and art research - to create a new culture which combines the landscape with sculptures from all over the world. Every artist brings his unique heritage and his own spirit. Another intention of the founder was to create a cultural melting pot, bringing closer East and West. The Yuzi Paradise Sculpture Park is a wonderful achievement in constructing an inspiring site. While walking through the magnificent landscape of green valleys, different sizes of lakes, surrounded with the astonishing shaped mountains we discover thousands of different sculptures – a pluralistic selection from all over the world. The sculptures bring to the landscape the exceptional spirit of each country that they represent. The purpose was to integrate, unite and bring together different cultures, different human states of minds and approaches to life. The message of the works of art is that all human beings. Are similar in their humanity and united by common features even if they belong to different cultures, views and religious believes. Mr. Thao's point was to unite and harmonize people through works of art. My believe is similar; I believe that if we would put more emphasis on Art education and art practicing we could minimize the aggression and even prevent wars. Walking through this enchanted Sculpture Park is an inspiring adventure. You breath an atmosphere of harmony, beauty and peacefulness. Each sculpture is telling the story of its creator, his culture and experience of life.