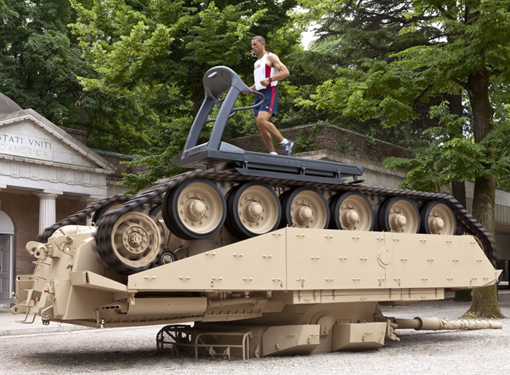 Year:
2011
Adress:
Venice Biennale 2011, United States Pavilion
Website:
Website
www.lissongallery.com:
Allora & Calzadilla magnify areas of political tension in the public realm through a wide-ranging body of work. They identify and stress the hairline fractures in societal systems – nationhood, environmentalism, states of war and resistance – through performance, sculpture, sound, video and photography. Meticulous researchers both, an understanding of material is central to their practice and they home in on its symbolic dimension, tracing the many marks of history, culture and politics. In the alternative monument Chalks (1998–2006), pieces of this most fragile and soluble of materials were scaled up to man-size and placed in public squares in Lima, New York and Paris, inviting passersby to take part in a collective drawing that would quickly disappear underfoot. Elsewhere the human body itself bears the marks of history: in the series of videos about the Caribbean island of Vieques, controlled by the US government since the 1940s and where locals were displaced for an environmentally disastrous military exclusion zone. In Half Mast\Full Mast (2010), a split channel video is unified by a flagpole aligned between two images that show sites of victory or loss; one gymnast at a time enters either top or bottom screen and physically raises his body to a 90-degree angle, a human flag at either full or half-mast. This image, like many of the duo’s works, balloons with irony or absurdity to what the artists call a ‘monstrous dimension’.
Allora & Calzadilla live and work in San Juan, Puerto Rico. Born in Philadelphia, Pennsylvania, in 1974, Jennifer Allora received a BA from the University of Richmond in Virginia (1996) and an MS from the Massachusetts Institute of Technology (2003). Guillermo Calzadilla was born in 1971 in Havana, Cuba and received a BFA from Escuela de Artes Plásticas, San Juan, Puerto Rico (1996) and an MFA from Bard College (2001). Collaborating since 1995, Allora & Calzadilla represented the USA in the 54th Venice Biennale (2011). Solo exhibitions include Indianapolis Museum of Art (2012), Haus der Kunst, Munich (2008), Stedelijk Museum, Amsterdam (2008), Kunsthalle Zurich (2007) and Walker Art Center, Minneapolis (2004). Among numerous group exhibitions, they participated in documenta 13, Kassel, Germany (2012); the 29th São Paulo Biennial (2010) and Performance 9 at the Museum of Modern Art, New York (2011).