The artwork Allison Lapper Pregnant by Marc Quinn (London, picture 2, more information) is contradictory: a flawed body is performed in one of the finest materials, made a human deficit exhibited no single gene. It is logical that this evokes a fierce resistance in many people. This artwork is a masterpiece by the perfect execution and lifelike expression and fundamental discussions it evokes.

Although Yolanda by Miriam Lenk (Berlin, picture 3, more information) does not have the perfect buddies, she is so attractive that it's hilarious.

Although Karl Bobek's Torso (Berlin, picture 5, more information) of a man impersonates who is actively involved, the man also seems to perish. This man confronts effectively serious issues of life and mortality. 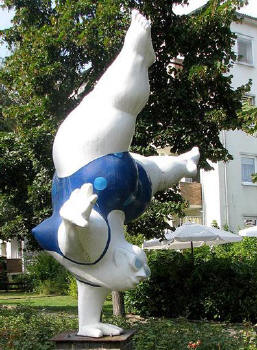 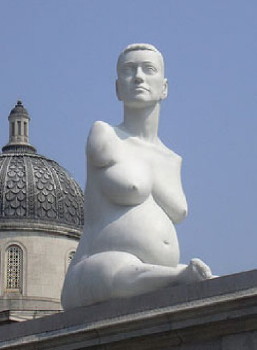 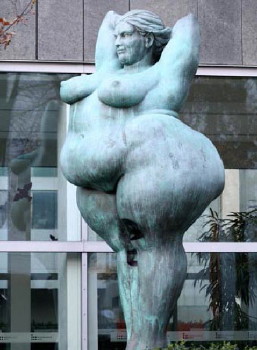 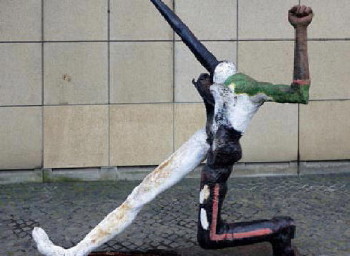 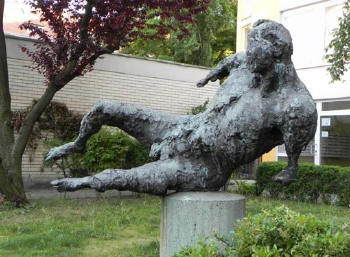 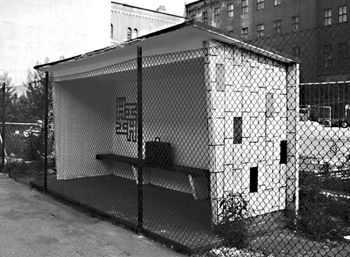 Picture 6
www.wikipedia.org:
Markus Lüpertz (born 25 April 1941) is a German painter, sculptor, graphic artist, and writer. He also publishes a magazine, and plays jazz piano. He is one of the best-known German contemporary artists. His subjects are characterized by suggestive power and archaic monumentality. Lüpertz insists on capturing the object of representation with an archetypal statement of his existence. His art work is associated to neo-expressionism. Known for his eccentricity, German press has stylized him as a "painter prince".
Lüpertz has cultivated sculpture and designed stage sets since 1980. Among his most famous works are the figure of Apollo for a niche in the Alte Oper in Frankfurt, from 1989, the bridge sculpture The Ugly Scares the Beauty (1990), in Karlsruhe, The Fallen Warrior, a three meters long bronze sculpture of a fallen warrior with helmet and shield, inspired by an ancient Greek sculpture, in the Berlin Kantstrasse, an ensemble of three sculptures for the park of Schloss Bensberg (2000), The Philosopher, a bronze nude sculpture created for the foyer of the new Berlin Chancellery, in 2001, and a sculpture of Apollo, inaugurated in the Elisabethenplatz in Bamberg, in 2009.