Year:
2010
Adress:
Alten Nationalgalerie
Website:
Website
An artwork with humor
Shape
This artwork has bizarre shapes; a funnel, a kind of coin, some exhaust pipes, a platter, some flags. The artwork is standing diagonal on a tripod. Scattered on the surface are letters and numbers.
Material
The artwork consists of different materials: rough and colored bronze, glossy peeling and rusted flags. The parts are welded together on a 'careless' manner while durable and valuable materials are used like bronze.
Location
The artwork is exhibited at large and important exhibitions.
Impact
The traveling nature of the work does in my opinion benefit the meaning of the work. Because the artwork can be placed in different surroundings, it can hardly reflect on a specific way on locations, rulers and situations.
Meaning
This is one of the few artworks with humour. And above this: it can expose many meanings and issues. To understand this, it is necessary to study the symbols on the artwork. Jonathan Meese does with Humpy Dumpy no effort to create a "beautiful" artwork but is convincing critical on the transience and futility of power and violence.
By Theo, www.artatsite.com

Compared with other artworks
The artwork William by Rebecca Warren (London, picture 1, more information) is touching for its ugliness. Because of the lack of humor, eloquence or aesthetic value it’s hard to be positive about the artwork.

These ugly giant Öffentliche Rose by Rolf Szymanski (Munich, picture 2, more information) shows himself as he is. If you look closely, a rose might become visible. Don’t you think that fading flowers are aesthetically? Vulnerable, rich in color, after years familiar with the house on the backside. Besides, this artwork is surrounded by ancient trees and mansions.

Willem de Kooning created with Reclining Figure (Rotterdam, picture 3, more information) an artwork that is attractive, three-dimensional, raises many associations by the experienced viewer. This is a good piece of art that fits in a city where functionality and sobriety is important, yet whith an alternative subculture within the artistic scene.

Another ugly cyclope Meeresgrund by Otto Petri (Berlin, picture 4, more information) looks fascinated at an attractive sleeping woman. This is not a good work of art, but the simple natural material evoke a primal force and sensuality.
By Theo, www.artatsite.com 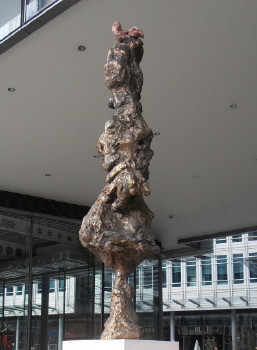 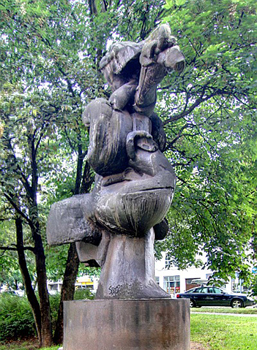 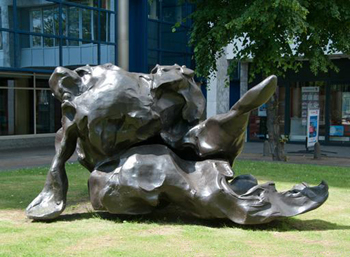 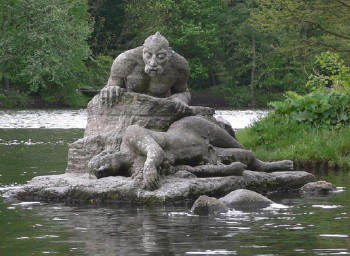 Picture 4
www.wikipedia.org:
The original concept was "animal with naked woman"; the animal became a machine and the human disappeared. The work of art was first created as a geometric sketch from which a small model was developed. The next step was a large polystyrene model, which was then "ore-machined". The sculpture was cast in the Hermann Noack art foundry. The employees of the bronze foundry were involved in this step to guarantee a stable basic structure on which the details could be built. The final processing of the surfaces including mechanical and chemical treatment was also carried out by the Noack specialists.
According to the artist, models for his work of art were: the Nautilus, Emma the steam locomotive, Lok 1414, Chitty Chitty Bang Bang, vehicles from Mad Max films, Ben Hur's chariot, the Snow Queen's sleigh, the Sandman's vehicle and the time machine. Meese characterizes his bronze object as forward-looking: "The baby spaceship flies forward only, without a rear-view mirror, without a railing and without nostalgia, great, great, great."
Gallery owner Philipp Haverkampf said that the work is a crazy mixture of time machine, spaceship and the sled of the sandman. When you look at it, you can see bizarre details such as geometric shapes, the Iron Cross and a beer bottle.
According to Der Tagesspiegel, the term 'Humpty Dumpty' in the title refers to the talking egg in Lewis Carroll's children's book Through the Looking-Glass, and What Alice Found There. In the Colonnades Courtyard in front of the Alte Nationalgalerie, the motley flying machine made of pieces as found at flea markets seems like a foreign body between the well-proportioned statues of classical sculpture schools.
Meese's sculpture is part of the educational canon of 100 works in the categories of film/video, music, literature, architecture, and art which the editorial team of Die Zeit compiled from readers' letters in the fall of 2018.

www.bortolamigallery.com:
As remarked in the catalogue of his exhibition at GEM: 'At first glance, Meese’s art has a raw, unscrupulous feel. It has the air of an exorcism, an artist responding to the violence and perversion of the modern world. On closer inspection, however, one discovers humor and a childlike approach. Meese’s likeness appears in almost all his work. At first he would have himself photographed or depict himself in his role as artist, in his studio, along with paint and brushes. But Meese gradually began to assume roles: the prophet ‘Meesiah’, a dictator, a soldier, Dr. No, Humpty Dumpty. Increasingly unrecognizable and wearing masks, Meese became an uninhibited collector of characters.' His new self-portrait paintings presented in our second gallery embody this freedom of role-playing and his inherent expressive flamboyance.

www.wikipedia.org:
Jonathan Meese (born January 23, 1970 in Tokyo) is a German painter, sculptor, performance artist and installation artist based in Berlin and Hamburg. Meese's (often multi-media) works include paintings, collages, drawings and writing. He also designs theater sets and wrote and starred in a play, De Frau: Dr. Poundaddylein - Dr. Ezodysseusszeusuzur in 2007 at the Volksbühne Theater. He is mainly concerned with personalities of world history, primordial myths and heroes. Jonathan Meese lives and works in Ahrensburg and Berlin.