Year:
1957
Adress:
Grosse Hamburger Strasse 26
Website:
Website
Aspects of this artwork
Shape
A group of hollow people of different age are standing close to each other and looking worrisome ahead. A number of people carrying a small bag with him. Perhaps they have no more possessions than they carry with them.
Material
The artwork has been created in an artistic way of laborious editing bronze. Eventhough the finishing is rough and dark, the shapes are recognizable enough when looking closely at the artwork.
Location
The sculpture stands in front of a Jewish cemetery next to a synagogue in the center of Berlin. Apparently there have been many people and this is evident from the number of pebbles that lie in front of the image. This is a Jewish gesture that shows that people want to be close to their beloved descents and will remember them.
Impact
The murder of 16 million Jews can not be grasped. An image like this brings there feeling of fear closer. This is perhaps the reason why the artwork is almost explicit. The people do not seem to move, the situation seems not willing to change. To me it is not entirely clear what contact is between the people, I see no interaction. It is a static image.
Meaning
The artwork makes present the Big Killing in WWII but this does not make the image topical. The almost static image reflects this elusive and terrible fact. However, to me the work is focusing too much on that moment. I wonder what the artist wants to tell to people nowadays and in the present situation. The Great Murder is such a grand and tragic fact that it is difficult to make it current. Because the life-to-date is standing that far ahead, the transmit of the message is not completely successful.

Compared with other artworks
The artwork Züge in das Leben, Züge in den Tod (Train in the Live, Trains in the Dead) by Frank Meisler (Berlin, picture 1, more information) is placed next to a subway station. This puts the Great Massacre of WWII next to the small, recognizable, everyday travel by subway.

The monument Denkmal für die Verfolgten of Dritten Reiches by Gertrud Bergmann (Berlin, picture 2, more information) takes the viewer into the fall of one person. The hand is the only thing that goes up, the arm is a straight line to the face that can still be seen in the sharp snapshot of the lapse. This short moment of this one person is clearly expressed. It is an artwork that evokes compassion and makes us longing to help a lonely person.

The bronze artwork Skulpturengruppe by Christa Biederbick (Berlin, picture 3, more information) is wonderfully tactile and emotional. It is not instandly clear what the statue is telling us. What tells us a child who reclines to a woman, three men who surround the woman and the child, two men looking worried and one man who is looking bright in a certain direction? It suppose it is a frightning situation and I see that every person has a different reaction. 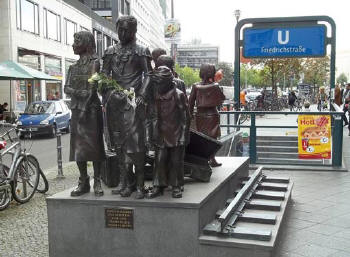 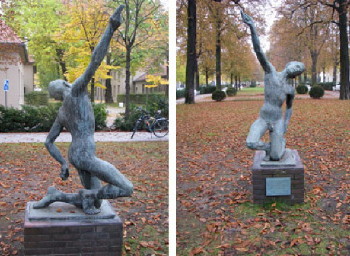 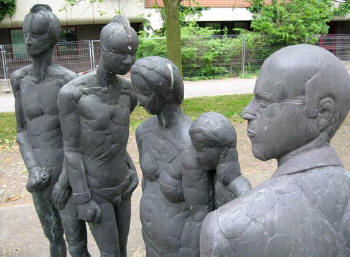 Picture 3
www.elephantinberlin.com:
In April 1945, the area was a mass grave of fallen soldiers and civilians killed in the bombing. Probably 3000 war victims - of which about 2000 are known by name - now rest buried here beside estimated 3,000 Jewish dead. In 1985, at the entrance of the cemetery, there's a memorial sculpture"Jewish Victims of Fascism" by sculptor Will Lammert erected, which was originally created in 1957 for the memorial in the Ravensbrück concentration camp. It is around 13 people sculptures were cast in bronze and grouped. Due to several attacks, the monument is now guarded at times.

www.wikipedia.org:
This group of figures (arrangement by Mark Lammert) was the first memorial in Berlin to the Jewish victims of the Nazis. A bust of Karl Marx, which was on display in the entrance to Berlin's Humboldt University, was removed at the time of German reunification.