Year:
1997
Adress:
KPMG Building
Website:
Website
Supposed to have a strong personality
Tindaro by Igor Mitoraj is meant to be a strong personality but it’s certainly not mysterious. Mysterious like Leucantha by Philip Grausman (figure 1, more information). The straight lined nose and angular lines around his eyes make the artwork one dimensional. The mouth and eye stay neutral and don't say much.

Prophete by Louis Derbre (figure 3, more information) comes near Leucantha; this man is focused. This artwork is not mysterious because this man is in meditation, this is a golden wise hyman, this human does not need matter, this human has enough with thoughts only.

Echo by Plaume Plensa (figure 4, more information) is a white natural stone picture but is not mysterious. Echo by Jaume Plensa is a beautiful artwork of a girl who is sleeping. You hear almost her silence and almost feels the warmth of her face.
By Theo, www.artatsite.com 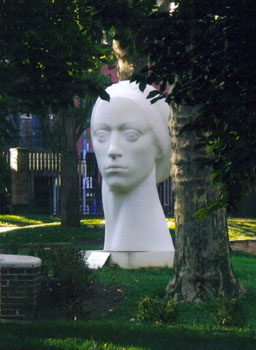 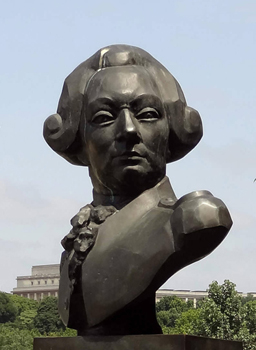 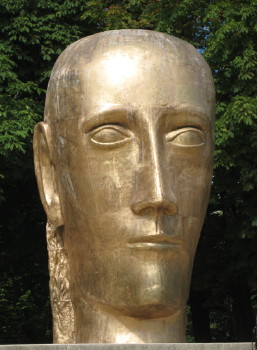 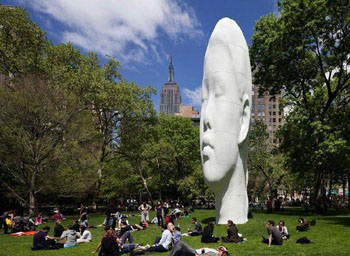 www.telegraph.co.uk:
Igor Mitoraj, who has died aged 70, was an artist renowned for his monumental sculptures of fractured heads, isolated limbs and torn torsos.
Mitoraj produced ravaged fragments of classical figures which, with a post-modern flourish, referenced the damage inflicted on antiquities by the passing of time. “I feel that a piece of arm or a leg speak far more strongly than a whole body,” he said. His giant marble, terracotta and bronze works — sometimes consisting of merely an outsized chin and mouth, a huge cheekbone and eye or a monstrous face lopped off at the forehead like a cracked egg — appear as if ripped from the pages of history. “I love classical beauty, it gives me energy and hurts me at the same time,” he reflected. “I am attracted and yet upset by beauty.”
His works have their greatest impact when paired with dramatic settings. In particular, his nod to Roman and Greek artistry suit the Mediterranean landscape: his Tindaro Screpolato bronze head still sits finely framed by the foliage of Florence’s Boboli Gardens, while in 2011 his towering busts and winged figures peppered the 5th-century ruins at the Valley of the Temples at Agrigento, Sicily.